After spending Christmas and New Year in Unawatuna on our Sri Lankan Adventure we had 4/5 days at the end of our trip where we hadn’t planned anything in particular.  We considered going back up to the centre of the country and exploring Ella but when we found a safari experience in Yala National park we decided this was the trip for us.   With the promise of Leopards and other fantastic wildlife we were excited to spend our last days of our holidays on safari.

How did we get to Yala National Park?

We hired a car and driver to take us from the Kingfisher Hotel to our lodgings at Yala.  We had booked our stay with Topan Yala, a luxury tented safari camp experience.  The journey took around two hours and we were soon transported from beach side to jungle.  Sri Lanka really is a country of many different types of regions.

Where did we stay in the park?

As I mentioned above we booked our stay with a company called Topan Yala.  This company offered luxury tents within Yala National Park boundaries.  The tents were large, well equipped with a big comfortable bed, air-conditioning, sun loungers on the decking, mini bar, adjoining toilet and shower room.

The tents were hidden within the foliage of the camp site and were fantastic, especially at night when you could hear the surrounding creatures, large and small making their way through the park. The common tent held the dining room where we had breakfast lunch and dinner.   Lunch was available on safari if you had booked the full day safari.

Activities available from the Campsite

The half day safari consisted of:

On the morning of our safari we were up and out early as it was a 15 min drive to the entrance of the park and we had to pay our park entrance fee, which our ranger took care of and was included in the price.  The earlier we got to the entrance the quicker it would be to pass through the gates to the park.

Most of the rangers spoke English and some had a few other languages too.

Our safari vehicle was robust and somewhat comfortable however its difficult being comfortable on the bumpy rocky roads of the park.  You do get shaken about a fair bit but boy is it worth it.   A real bone shaker of a ride.

Once in the park you see wildlife straight away and the ranger spots so much more that you wouldn’t see with your own eyes. Monkeys, Toucans, Elephants, Water Buffalo, Eagles, Painted Storks, large monitor lizards and so much more.  When we came upon a group of animals or something special the guide would ask the driver to stop so we could watch the animals going about their day.

Like the half day safari the day started early and included:

Having a full day in the park we were able to venture further than the day before and our driver took us immediately to one of the farther ends of the park which would be quieter with less safari vehicles from other companies around.  We saw much of the same species as the previous day but did come across some new packs of elephants and we were on the hunt for the elusive leopard.

There are several leopard families throughout the park and the chance of seeing them was totally dependant on the leopards being in the same place you were.  It was a big park.  Our guides were good and spotted leopard tracks in the sand and they were on their radio listening for sightings.  We waited at the roadside, at one point, as there had been a leopard spotted heading for the road and our guide said that there was a good chance it would cross in front of us.  It wasn’t to be.

Not to be disheartened, our luck changed.  When the half day trips left for the morning and before the afternoon safari vehicles arrived, our guide got the call that a leopard was spotted on a rock, not far from where we were.   Off we went and sure enough there it was, sitting regally on a rock, in the sun, totally oblivious to us watching from below.   Magnificent.

The full day trip also included lunch and we were still all giddy from the leopard spotting when our driver turned off the track onto a smaller track which opened up into a clearing on the beach.  Here’s where we had lunch and it was a lovely hour, chilling by the sea before the bone shaking afternoon safari started.

In the afternoon, we moved to another area of the park where there was a large lake.  The lake was absolutely jam packed full of birds and other animals.  Crocodiles, large deer like animals called Sambar deer, kingfishers, minah birds, storks.  It was never ending and so beautiful and peaceful.  What a fantastic experience and a superb tour.

On the first afternoon we were there, soon after we arrived, we went on a Bush walk which was one of the activities organised by the Topan people. Surrounding the compound there were a myriad of paths looping round the jungle and watering holes.

We saw a myriad of animals and birds including monkeys, parakeets, water buffalo, deer and so many more. It was a lovely experience and amazing to hear all the wildlife calling as the day ended. Our guide was really good at explaining the different birds and calls we could hear and said that a few days ago a baby elephant wandered into the compound near the tents which they had to guide back out to the main plain to find its mother.

Sithulpawwa Rajamaha Viharaya is an ancient Buddhist monastery located in Hambantota District, South Eastern Sri Lanka.  It is believed to have been built in the 2nd century B.C by king Kavantissa.  The name Sithulpawwa is derived from the word “Chiththala Pabbatha”, which means “the hill of the quiet mind”.

We had a driver from the campsite who took us the 18 miles to the monastery.  We spent a good few hours climbing first up to the stupa on a hill and then up the adjacent hill where other Buddhas and sacred sites lay.

This was the last trip for us as later that day we would be heading back to the airport and our Sri Lankan adventure would come to an end.  We will definitely be back in Sri Lanka.  There’s so much more to explore and I hope you get to visit too.

Exploring Galle, Sri Lanka
One of the things we love to do when visiting a new city is to see as much of it as we can with the time allowed.   I don’t know about anyone else but I hate to miss anything.

How to cook a traditional Sri Lankan Curry | Cooking Class

We found a cooking class.
Any travelling experience for us tends to involve food and when we landed in Unawatuna in December 2018 we were delighted to find that one of the restaurants we visited did cooking classes. 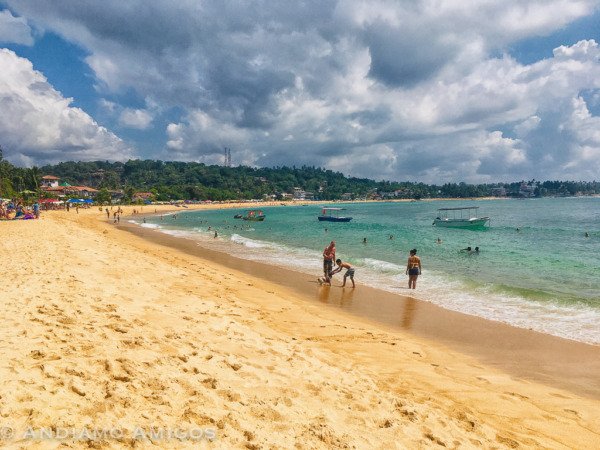 Arriving at Galle from the train we exited the station and hailed a Tuk Tuk.  There were loads around and we just chose the first one and asked him to take us to Unawatuna.