A weekend in Rome

We had planned this weekend in Rome to attend the Six Nations Rugby tournament between Italy and Scotland and of course being in Rome and having a full weekend to play with we planned so much more.

We flew from Manchester to Rome on Ryanair and arrived quite early in the morning on the Friday so we had the best part of the day to play with.

After arriving at the airport there’s a regular train service to get you from the airport right into Roma Termini the main train station in the city centre.Like most city centres with a metro we headed straight for that and Rome’s is pretty straightforward and all areas of the city and all the main attractions of Rome can be reached from the central station Roma Termini.

Where did we stay for our weekend in Rome ?

We chose Li Rione Bed & Breakfast because of its location to one of the sights that we wanted to see.  Basilica di San Clemente.  As well as being close to the Colosseum and its metro station it was fantastically located.

We had a double room with an en suite and there was a terrace outside the breakfast room which you could actually see the Colosseum.

The B & B facilities: 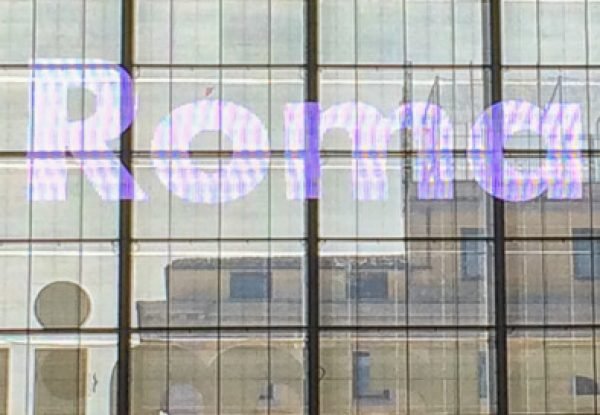 What did we do on our weekend in Rome?

This was our reason for going and we were excited about seeing Italy v Scotland on the Saturday.   When we arrived in Rome there were so many Scottish people in the city all enjoying the Italian hospitality and looking forward to a great game of rugby.   Everywhere you looked there were kilts, saltire crosses and happy smiling people.

How did we get to the stadium?

On the Saturday morning after breakfast we headed into the city centre and made our way to Piazza Popolo as there was to be a gathering there before walking along the banks of the river Tiber towards the stadium.   Here’s a few ways to get from the city to the stadium.

You can find walking directions here.  It takes about 44 mins from the city and is around 3.5km.

By bus from Piazza del Popolo to the Stadium you can take bus number 628 from the stop Passeggiata Ripetta to the stop De Bosis/Stadio Tennis.  The bus is every 20 mins and takes around 22mins and costs only a few €.  You can check the bus route here.

You can always take a taxi with ranks close by to Piazza del Popolo and the journey takes around 6 mins and costs approx €16.  The taxi route can be found here.

The stadium facilities were good.  There were plenty of food and drink stands and of course merchandise stands as well as sponsorship stands.  There was a pipe band and a local marching band and the atmosphere was electric.

Once inside the stadium there were loads of beer/popcorn and snack sellers making their way up and down the stands throughout the game so no one went thirsty.

The game itself was fantastic and before we knew it we were making our way back to Rome with all the other supporters.

What we loved was no matter which team you were supporting everyone got on with everyone else and it was like a big friendly happy party.

Being Scottish just hearing the sounds of a pipe band puts a big smile on my face and hearing them at the stadium just set the atmosphere.

Opera in a church

One of the things Chris had planned for the weekend was a performance of La Traviata in a church.  Chiesa di San Paolo (St Pauls within the walls)

We had booked this for the Saturday night after the rugby and we were really looking forward to it.

We’d seen La Traviata before in Manchester but never have we seen an operatic performance in a church.

As people made their way into the church and onto the pews the lights dimmed and the performance started with an accompanying pianist.

It was fantastic.  The voices reverberated within the church and made the hair stand up on the back of our necks.  What an experience.

How did we book?

Where is the church?

Here is the location.  Its fairly central to most of the landmarks of Rome and not hard to find at all. 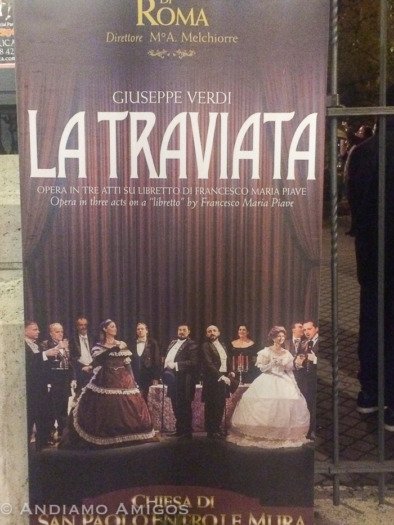 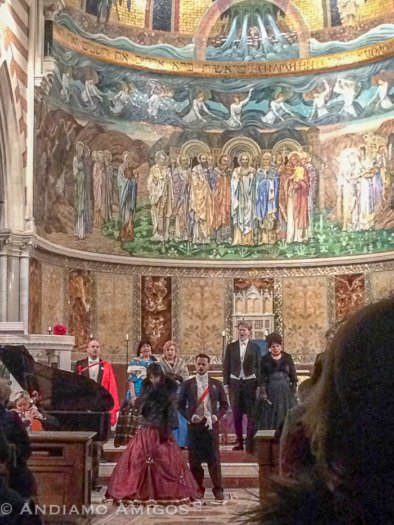 This was something else that Chris had planned and was fairly close to our B & B.

San Clemente is one of my favourite attractions in Rome and definitely worth visiting.

It’s a beautiful church from the twelfth century, there’s also a fourth century temple and an old Roman mansion to discover  down dark and humid passageways.

It costs €10 to get in and well worth the ticket.   There’s 2 levels to explore as well as some outside areas.

Its pretty close to the Colosseum and its exact location is right here.

Did you know the city of Rome had a pyramid?  No, well, it does and its smack bang in the middle of a busy intersection.

The Pyramid of Cestius was most likely built between 18 and 12 BC. The 36 meter (about 120 feet) high pyramid was built as a tomb for a wealthy Roman who was enchanted with all things Egyptian.  No one knows who that Roman man was.

So if you want a peek inside an Egyptian pyramid in Rome it’ll cost you approx €5.50

Here you’ll find the remains of a Roman house & aqueduct at an archaeological site 9 meters below modern street level.

If you’ve visited Rome then you’ll most definitely have stood in front of the Trevi Fountain with your selfie stick trying to get the most perfect photo.  You may have even thrown a coin into the water and made a wish but I’ll be you didn’t stop and wonder where the water came from or where it went after flowing through the fountain.   When you visit the Vicus Caprarius you’ll find out.

Once you’ve paid your €3 you’ll make your way down the ramp to the excavation area where there are information boards and ancient artefacts including Afrian amphore and a bowl full of ancient coins.

It really is a superb attraction and at €3 its fantastic value for money.

On the corner of Piazza Navona is the museum and ancient ruins of the Stadium of Domitian.  The stadium was  on the site of the Piazza and could hold approx 30000 people who came to witness all sorts of events.

Where is the museum:

The entrance price €8.50 provides you with an audio guide that leads you through the exhibits and illustrative and informative panels.   It takes around 45 mins to visit all the exhibits.

One of the other things we really wanted to do whilst visiting rome this time is visit a restaurant that was reputed to be the home of carbonara.  Somewhere that you could get the most authentic carbonara in Italy.  Roscioli Salumeria con cucina and we weren’t disappointed.

The restaurant had appeared on a British television show Rome Unpacked which shows the presenters visiting and enjoying the carbonara.  So we put it on our to-visit list.

The restaurant was small and we had to book and we booked to sit up at the bar and that was the best choice.  We could see the staff at work preparing starters and desserts and drinks and our meal was amazing.  So good we even bought their cookbook to add to our collection.

We would definitely recommend this restaurant and when we’re back in Rome, we’d absolutely go back here.  Oh and just to note, we always make our carbonara this way, so delicious.

The restaurant is fairly central and you can find directions here.

Hostaria I Cementini – Our second recommendation

Second on our recommendation list is Hostaria I Clementini.  This little traditional restaurant was right across from the Basilica and as it was closed for lunch when we arrived we thought we’d dive in here and get a bite to eat.

We were really surprised when the owner suggested we try the artichoke lasagna as it was their special of the day and it was delicious.

A little unassuming place with only 5 or 6 tables and a warm welcome so if you’re in the area then do pop in as you won’t be disappointed.

The restaurant is really close to the colosseum and Basilica di San Clementi  so you’ve no excuse not to visit – click here for the directions.

Italy a travel guide | How to get there & explore 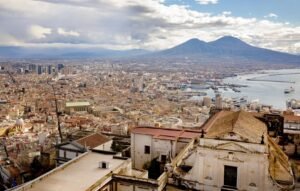 Getting to and around Naples | You’ve arrived, now what?

Getting to and around Naples | You’ve arrived, now what? Alibus – Airport to Naples City Centre View over Naples Chris and I have been 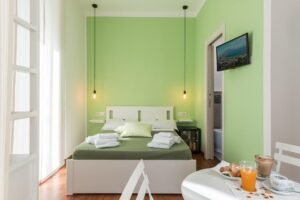 Naples, Italy | Some of the places we’ve stayed and liked!

Being one of the most visited cities in Italy, Naples has hundreds of accommodation options for you to choose ranging from the most lavish hotels to the budget beds and everything in between. 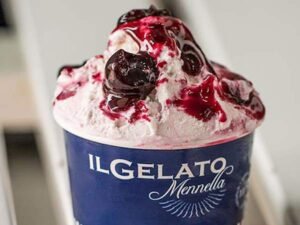 Napoli – How to navigate food options in Naples?

Napoli or Naples is reputedly the home of the pizza so you’d expect to get a decent pizza in the Home of Pizza, Right? Well of course it is and the pizza is pretty spectacular in Naples

Naples Italy | A few special sights not to miss when you visit. Pio Monte della Misericordia Catacombs of Naples What is it about Naples? 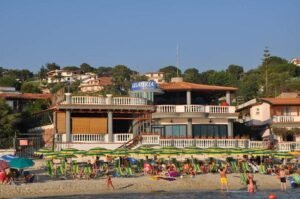 How to get to Calabria | Exploring Italy’s secret region

If you are looking for a traditional Italian holiday hotel then look no further than Villagio Albergo da Ciccio sul Mare It really is a true Italian experience.