Six amazing things to do when Exploring Istria, Croatia

How did we get to the Istria Area?

We drove to the Istria from the Plitvice Lakes National park and the directions can be found here.

The journey was just over 3 hrs, 240km approx and a mix of motorway and A roads and some smaller country lanes.

The scenery was spectacular with high mountains coated in trees and we wondered if there were bears in the mountains which when we googled confirmed that there probably were.

First of all let’s sort out somewhere to stay while we explore Istria.

As usual we didn’t prebook anywhere and as it was towards the end of the season we figured that we’d find a spot on a campsite for Bob, our campervan.

There were quite a few to choose from on the coast and we opted for Polidor Family Camping Resort in Funtana as it had some great facilities and was pretty central to where we wanted to visit.

We would recommend this campsite and visit again if in the area.

Having our bikes we cycled along the coastal path that took us into the town of Porec in around 30mins.  There were ample bike stands available on the promenade which allowed us to park our bikes up and explore the town.

This is a Roman Catholic basilica in Porec. The complex is an excellent example of  Byzantine architecture. Because of its exceptional value, it has been inscribed on the UNESCO World Heritage List since 1997.  The building has been rebuilt around 3 times as previous buildings have been destroyed by fire, flood and earthquakes.   Its well worth a visit and has some really cool features such as the mosaics, you cant miss those.

This house in the centre of town is incredibly quirky looking and dates from the 13th century.  Closed to the public but still worth a visit to see the medieval features.

This museum is primarily to protect the local culture and history.  It is spread over several buildings and has artefacts from a variety of eras.   The museum can be found here – Ul. Decumanus 9, 52440, Poreč, Croatia

Take a dip in the cool clear ocean

There are many beach areas both north and south of Porec with crystal clear water and a mix of rocky stones and fine sand beaches.   Watersports are available and equipment can be hired at many of the hotels that line the coast such as the Resort Zelena Laguna.

There is a fantastic well maintained wide cycle route from Funtana to Porec and the cycle route passes by where we were camping.  The route is suitable for most fitness levels and is primarily flat with only a few rises.   It follows the coast mainly which offers some fantastic views of the region.

One of the best things we did was take a boat trip from Porec down the coast to Rovinj.   I don’t remember the exact company we used but there are many vendors lining the promenade of Porec offering all sorts of trips.   We chose one to Rovinj which left at approx 10am in the morning and returned around 4pm giving us plenty time to explore the city of Rovinj.   The boat journey was around an hour and it was lovely being out on the waves.

Rovinj was beautiful and here’s a few things not to miss if you get the chance to visit:

Take a trip to the Istrian hill top town of Motovun

The medieval town of Motovun is spectacular as you approach it sitting atop a mountain and its a walled town and is mainly famous for its truffles.

To get up to the town of Motovun you can drive but the streets are really narrow and there’s limited parking so we opted to leave Bob in the car park at the base and walk up to the town.  Its a fairly strenuous walk and there are shuttle buses available in the bottom car park for people who aren’t able to walk.

A few things you don’t want to miss at Motovun:

If you’re there for longer then there are some wonderful hiking trails to explore and also since truffles is the main tourist attraction you can book yourself onto a truffle hunting tour.

Loads to do in a spectacular area.

Funtana was a town just down the coast from our campsite and it was a lovely cycle down, along the coast for an evening meal or just for a wander round the quirky little streets.

One of the things that happened whilst we were looking for a bar to have a glass of wine was that Chris happened upon a little old lady who had a few benches in her yard and sold her own wine by the carafe.  A little bar attached to her home for her own special blend of local grapes to produce a merlot type red wine.

It was delicious and we would have stayed for more if it wasn’t for the fact we had to cycle back to the campsite but that didn’t stop us buying a couple of bottles.  I don’t have a basket on the front of my bike for nothing !

Visit the historic city of Pula

The main reason I think people visit Pula is that they have the best preserved roman ruins outside of Italy with a nearly complete ampitheatre and other buildings of historical interest.   Here’s a few things not to miss:The Amphitheatre – Its one of the best preserved roman buildings in the world and is still used today to host concerts, sporting events and outdoor cinema showings.

The Temple of Augustus is nearby and worth a visit.  Its dedicated to the goddess Roma and Emperor Augustus and is pretty much typical temple shape.  You can go inside and the cost is only around £1.50

Pula also has loads of cafe’s & restaurants to explore as well as extensive beach areas where you can chill and take a dip in the beautiful ocean.  Its very much a tourist town and has all the relative amenities.

We only stopped for an afternoon but will go back one day and explore more.

Visit a local vineyard – and get the taste of Istria

This was one of the most fun things we did whilst in Croatia.  I mentioned above that we had lunch in Konoba Mondo we loved the house wine so much we asked the waiter where it was from.

He explained that it was from a local vineyard Vina Visintin and when we enquired where the vineyard was he said it was only 2km away and gave us the address details..

When we left the restaurant we made our way to the vineyard and knocked on the door.

The owner spoke no English and we spoke no Croatian but between us we indicated what we wanted and he gave us a tour of his vineyard and then showed us the cellar where he let us taste some fabulous wines.

We were only interested in the one we’d tasted at the restaurant and we bought a case of that from him and he seemed really happy.  Gorgeous wine. 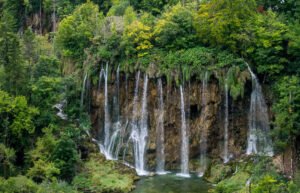 The park is a 295-sq.-km forest reserve in central Croatia. It’s known for a chain of 16 terraced lakes, joined by waterfalls, that extend into a limestone canyon.

2 thoughts on “6 Amazing things to do when exploring Istria, Croatia”