Vico Equense | A little gem on the bay of Naples

Vico Equense is part of the greater Bay of Naples metropolitan area and is a tourist destination. Located on a high cliff, it is down the coast from the city of Naples and the views over to Vesuvius across the Bay of Naples were beautiful. It’s quieter and less touristed than the neighbouring towns but has a good choice of places to eat and accommodation. It doesn’t have a beach as such but a beach club at the bottom of a steep winding road. They served the best Vongole.

How did we get to Vico Equense?

As mentioned in a previous post we dropped our hired car off at Catania Airport and flew up to Naples Airport  The flight was only around €28 which was cheaper than the train and only about 35mins flight time so it was perfect. We stayed in Naples for 1 night before heading down the coast by train to Vico Equense.

The train to Vico Equense is on the same line as you’d take for Pompeii & Herculaneum (more info on the train can be found here).  The Curcumvesuviana runs from Naples city centre right down to Sorrento with some branch lines leading off to other destinations.  The line for Vico Equense is on the coastal line.

You can catch the train from either Napoli Porta Nolana Station or Napoli Piazza Garibaldi Station Porta Nolana is the terminus where the train starts and ends but Piazza Garibaldi is the more popular station for tourists. If you want to be sure of a seat then head to Porta Nolana. Its not a pretty station inside by any means and you’ll need cash for your tickets but you most certainly will avoid the crowd.  As the train pulls into Piazza Garibalidi station you can people watch as the tourists squeeze themselves onto the train.

If you do opt for Piazza Garibaldi then it is located at the lower level of Napoli Centrale (the main train station of Naples). When you get to the Central station, most importantly, follow signs for Piazza Garibaldi or Circumvesuviana.  Both stations are signposted really well. Tickets cost approx €4.00 per person each way. You must buy the tickets at the station. There is no way to get it ahead of time online or on the train.

Trains depart every 30 minutes from either station. The Circumvesuviana drops you off at Vico Equense station (2 stops after Pompeii).  Once you arrive, come out of the station and turn left.  Walk up the hill and then turn left again up the Main Street to the centre of town. The Circumvesuviana is operated by EAV. You can check the official timetable on its website Here

Where did we stay?

We chose a budget option for our stay in Vico Equense. Apartment Mihi was simple, clean and centrally located in town and was a good choice. For more accommodation options Click Here

If its a budget stay you’re looking for then this place fits the bill perfectly.

What is there to do around Vico Equense?

Get down to the beach

Having just a few days left of our holiday and with the weather being spectacular we spent our daytimes swimming in the sea and relaxing at the Beach Club Antico Bagno Conca Delle Sirene.   We chose this place because it was directly below the town of Vico Equense and it had a fantastic restaurant for lunch.

Take the train down to Sorrento

There is a direct train departing from Vico Equense and arriving at Sorrento. Services depart hourly, and operate every day. The journey takes approximately 10 min.  This is the Circumvesuviana train mentioned above and there is a ticket machine at the station so you can get a ticket before jumping aboard.  Tickets are only approx €2 each way.

Take the train to Pompeii & Herculaneum

One stop away from Vico Equense on the train in the direction of Naples is the stop Castlellammare di Stabia. Behind the station you will find the Funicular railway which takes you to the top of Monte Faito. There are some fantastic paths to walk from the top and the cable car runs throughout the day so you can quite easily spend a day up there.   A round trip costs approx €8 for an adult and credit/debit cards are not accepted so make sure you have some cash.

All about the food

Like all our other Travel Adventures we try and seek out the food unique to the area or something that’s been recommended and for Vico Equense here are two restaurants we tried and loved and a cafe/bar where we enjoyed an aperitivo before going out for the evening.

This is the first restaurant on our list is Pizza by the metre. Here you literally by the pizza by the metre, 1/2 metre or 1/4 metre and can customise it how you like.   With a metre being too large for us we opted for a 1/2 metre and that was more than enough. Such a fun place to eat as the pizza arrives on a wheeled trolly and served by a well dressed and efficient waiter. In fact the whole place is really efficient.  Set in what resembles a school dining room seating a good few hundred people with about 50+ waiters it really was a wonderful experience.  How much did it cost?  Well it wasn’t expensive and yes, you guessed it, you paid by the metre!  Yes, of course, its a bit gimmicky but the pizza was excellent so definitely go!

Terramia was a lovely restaurant with a fantastically extensive menu.  From seafood to steak to salads and traditional italian pasta dishes there was so much to choose from.  One thing that Chris always looks for is pannacotta as that’s his ultimate favorite desert and this pannacotta didn’t disappoint as you can see from the wobble wobble video at the top of this page. Grand Caffe Zerilli This was the perfect place for an aperitivo and it had great chichetti.  It was a fabulous place to people watch as it was right on the roundabout of the main square Piazza Umberto 1.  The old men of the village would congregate there in the evening to catch up on the days events and young men and women would zip about on vespas.

Its really easy to get to most of the islands in the Bay of Naples and Procida is no exception.

We had planned this weekend in Rome to attend the Six Nations Rugby tournament between Italy and Scotland and of course being in Rome and having a full weekend to play with we planned so much more. 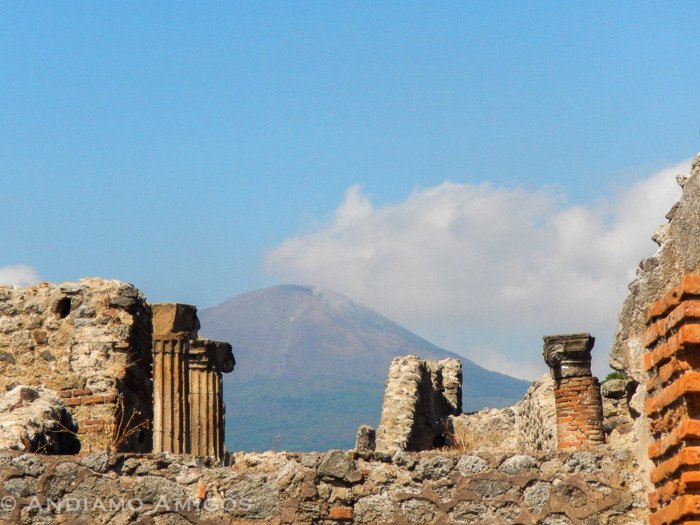 How to best explore Pompeii & Herculaneum | Tips and hints

We visited Pompeii & Herculaneum from Naples and on this visit to Naples we booked the Hostel of the Sun for a few nights.