Singapore | An amazing city with so much to see and do

Our travels this year took us to Singapore, Lombok & Gili Air and we kick off in Singapore where we explore Singapore of old, new Singapore, the Singapore F1 Grand Prix,

We got out of the city and enjoyed discovering all the food delights this wonderful city has to offer. Sit back, hold on, here we go.

Bite sized guides to Tiger Balm Gardens, The Singapore F1 Grand Prix, Southern Ridges Hike, The Gardens by the bay,  lots of food, the MRT, Clarke Quay and other interesting facts about this great city.

We flew from Manchester to Singapore on Etihad via Abu Dhabi and booked our flights through Expedia.   Great flight and would choose Etihad again.   Arriving in Singapore it was really easy to navigate through Changi airport downstairs to locate the metro that would take us into the city.

Singapore’s MRT (Mass Rapid Transit) system is probably the fastest way to zip around the city. Most of our popular attractions are just a short walk away from an MRT station, making our trains a great way to get around.

2. The Pass can be bought at the TransitLink Ticket Office at selected MRT stations. They are also available daily at the Automated STP Kiosks at Orchard station, HarbourFront station, and Changi Airport station (Terminal 2 and 3) near the Transitlink Ticket Office.

3. Regular EZ link cards. These cost $12 inclusive of card value, and come with a stored value of $7 for you to use on your commutes. You’ll be able to purchase this card at any Transitlink Ticket Office or convenience stores.

The metro is really easy to use and once you’ve got your card you can get to all areas of the city really easily.

Our base to explore Singapore?

We stayed at the boutique hotel Lloyd’s Inn which we chose because it was fairly central, near the MRT stop Somerset and it was reasonably priced, what more could we ask for.

The hotel itself was small, with a very minimalist look but the room was clean and comfortable and the bathroom had the option of an outside shower which was really cool.   There was no breakfast option actually in the hotel but you had coupons that you could use in some of the nearby cafes which was brilliant.  The hotel had snack vending machines, a roof terrace and a dipping pool and gardens but we only used the room to sleep in and shower in so we didn’t use any of the other facilities.  We enjoyed our stay however and would recommend this hotel to anyone visiting Singapore.

The best things to discover when you explore Singapore?

Good lord there are so many things to do in Singapore but our main reason for being there was the F1 Grand Prix. Singapore is a night race so that left us plenty time to explore the city and all the other sites that Singapore is famous for.

Here’s just a few things we got up to.

Let me tell you a little bit about the F1 before we get into the rest of Singapore.   I’ve detailed all you need to know about attending the F1 in Singapore in its own dedicated page which you an find here as there’s just too many things to let you know about to post on this blog.  We let you know how we got our tickets, which tickets we bought and why, the facilities inside the track, how to get to the track and some hints and tips to make your experience the best

For other F1 Grand Prix experiences then check out these links for:

Our first venture out was to Tiger Balm Gardens or as they’re also known Haw Par Villa.  Chris had lived in Singapore up till he was 5 yrs old and could remember visiting here as a child so we took a trip down memory lane for him and made our way to the gardens. The gardens contain statues and dioramas depicting scenes from Chinese folklore, legends, history and illustrations of various aspects of Confucianism.  The original gardens in Hong Kong have now closed but the Singapore gardens remain open and popular today even if a little dated.   They were originally built to promote the Tiger Balm product.

How to get there –

Free Admission and open all year round.

This was a walk that took you out of the city and the full walk report and more information on how to get there and what you can see do can be found on the Southern Ridges Blog Post.   It really was a fantastic walk and took you right out of the city into the greenest of places.

Gardens by the bay

Wow this place is amazing.  Tropical greenhouses, cloud forests and spiral walkway that takes you through different climates.  Outdoor gardens with a variety of plants and wildlife and all centred around the main Marina Bay Area of downtown Singapore.   Its breathtakingly beautiful and you can find out more about our time here in our Gardens by the Bay blog post.

Clarke Quay is a historical riverfront area of Singapore noted for its trade history and position on the Singapore River.  We visited for lunch one day and had a lovely Mexican meal at Muchos and then went for a river cruise up the Singapore River afterwards.   There are loads of bars and restaurants around the Clarke Quay area to choose from and it really is one of the hot spots to visit both day and night.  We never got there at night time as evenings were reserved for the F1.

The River cruise was operated by Singapore River Cruises and took you from Clarke Quay right down to Marina Bay and back again stopping at select quays on the way.  It really was a beautiful way to see some of the city and the landmarks we’re all familiar with.   Cruises run throughout the day and cost around £12 for an adult with a reduction for children.  The cruise is accompanied by a guide who will point out all the sites of historical interest along the route.   Some of the bridges have really interesting stories.

Oh my goodness one of the things I was really looking forward to was the food and Singapore didn’t disappoint.   There is so much to choose from and the street food culture is very much alive and kicking.  Here are a few of our foodie highlights:

Little India – the market in little india was awash with stalls filled with families round big pots of deliciousness and rotis, naans, rice and other accompaniments were being prepared.  The smells were overwhelming and you could almost taste the air with all the spices being used.  Chris has what he considers to be one of the best meals he’s every had there.

We’ve eaten in Michelin starred restaurants and yet food served on a bit of paper on a plastic tray was deserving of every accolade.

Chinatown – There are so many restaurants here serving all kinds of chinese delicacies the only way to choose which was the best was to look for the queues and we had a fab sticky beef meal here.

Singapore is renowned for its Hawker street food halls and Lau Pa Sat was one that we initially went to and had the best chicken and rice. The most fascinating fact about this hall was that the iron work in the roof was made in Glasgow so I immediately felt a connection.  So if you want an extra bit of culture with your meal then here’s the place to go.

On the street leading to our hotel there was a row of shops, cafes and curry houses and we stopped off here on the way bak from the Grand Prix late one night around midnight and had one of the best curries.  There we were, sitting with all the locals, having the most excellent food.

So that’s our first taste of Singapore all wrapped up.  We’ll be back as there’s so many other things to see and do and we’ll report on them when we visit again.  But for now catch up on our more informative posts on: 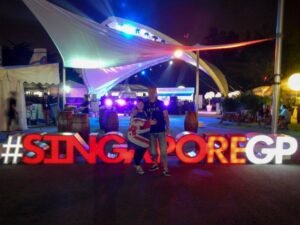 Singapore F1 Grand Prix | How to get there and what to expect.

Singapore F1 Grand Prix
One of the main reasons for visiting Singapore was to attend the Singapore F1  Grand Prix.  We are keen F1 fans and really liked the look of this race. 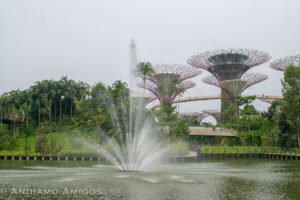 Singapore | Visit & explore the beautiful Gardens by the Bay

The Gardens by the Bay
The gardens by the bay was one of the best things we did in Singapore.  For information on how we got to Singapore and the other things we got up to you can visit that story here. 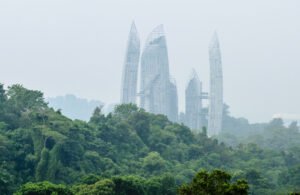